Touring Around Trebinje and Ljubinje

Bosnia and Herzegovina Herzegovina Nature Culture People stories bluetrail adventure Blue Trail
Coming in just a couple dozen kilometers shy of full circle from where I began my journey in Dubrovnik, Trebinje was my final destination along the Via Dinarica Blue Trail where I spent about four nights getting to know this southernmost city of Bosnia & Herzegovina as well as its surroundings. 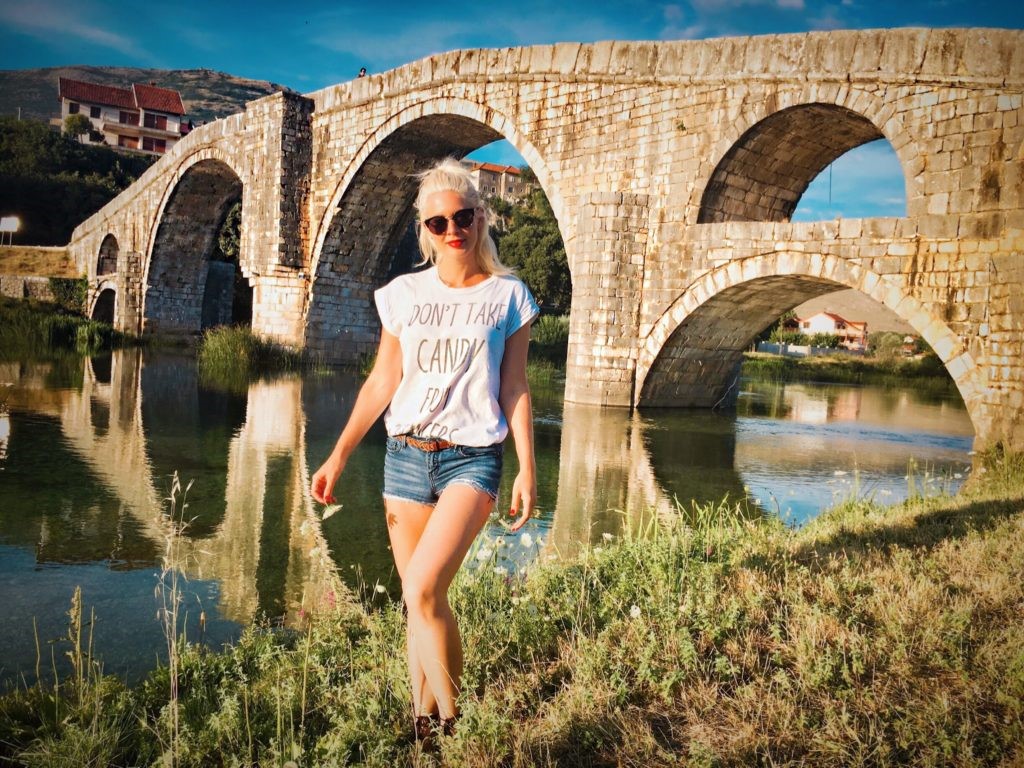 Located 30 kilometers from Dubrovnik, 40 kilometers from Herceg Novi, and 80 kilometers from Kotor, Trebinje is another great place to base yourself for exploration of Croatia and Montenegro’s most famous coastal cities at more than half the price while simultaneously enjoying the hidden secrets of eastern Herzegovina of which there are many.

Trebinje itself is probably one of the most pleasant towns I’ve spent time in Bosnia & Herzegovina and definitely not as frequented by tourists as it should be even though it’s only a couple of hours away from one of the country’s main hotspots, Mostar. It’s just super chill with an interesting Ottoman/Austrian/suburban mix of architecture and one of those places you may only plan to stay one or two nights, but instead stay for four because it’s so comfortable. 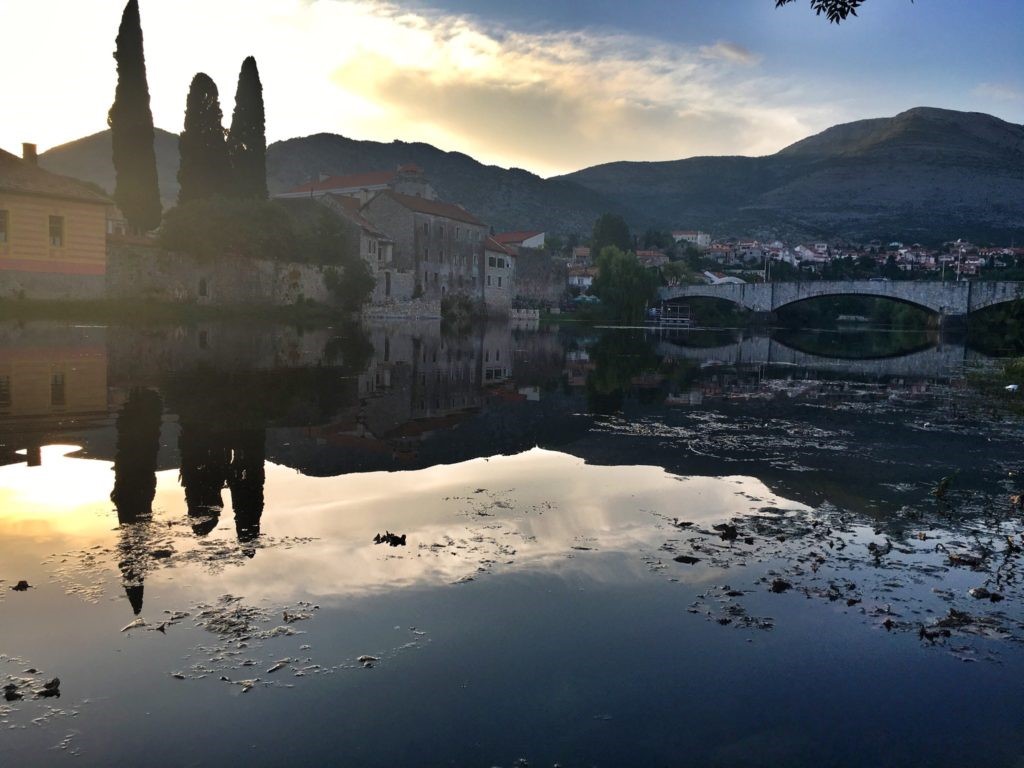 As it’s not overwhelmingly large so you can easily get around by foot everywhere and actually see all of the main sites in a couple of hours. Built right on the beautiful Trebišnjica, it has a small fortified old town from the early 18th century known as “Kastel” where you find many cultural points of interest such as the Museum of Herzegovina (located in the old Austrian army barracks), Osman Pasha’s Mosque and Sultan Ahmed’s Mosque. Kastel is also where most of the nightlife is at, especially during the summer months,  if you are looking for some action. 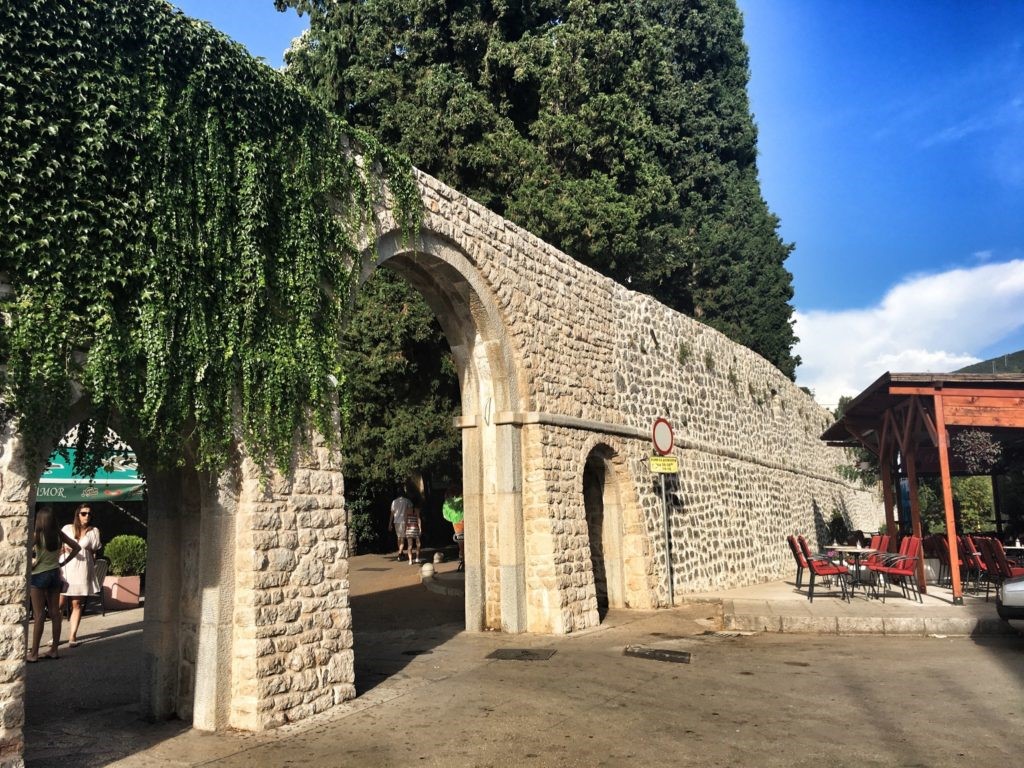 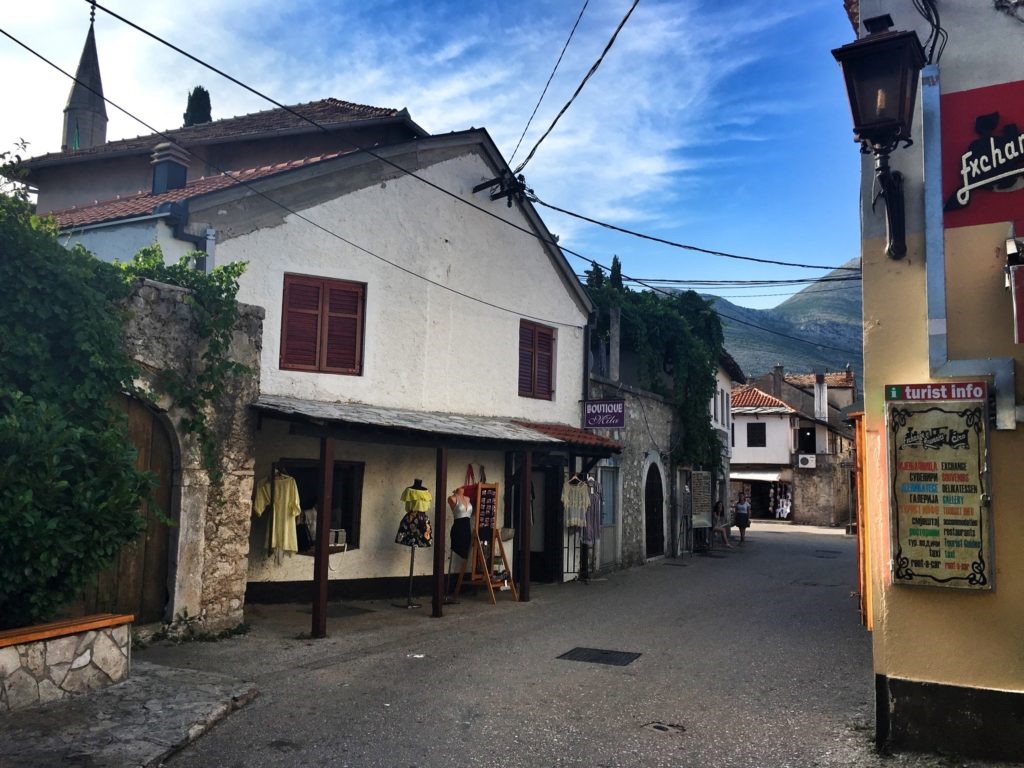 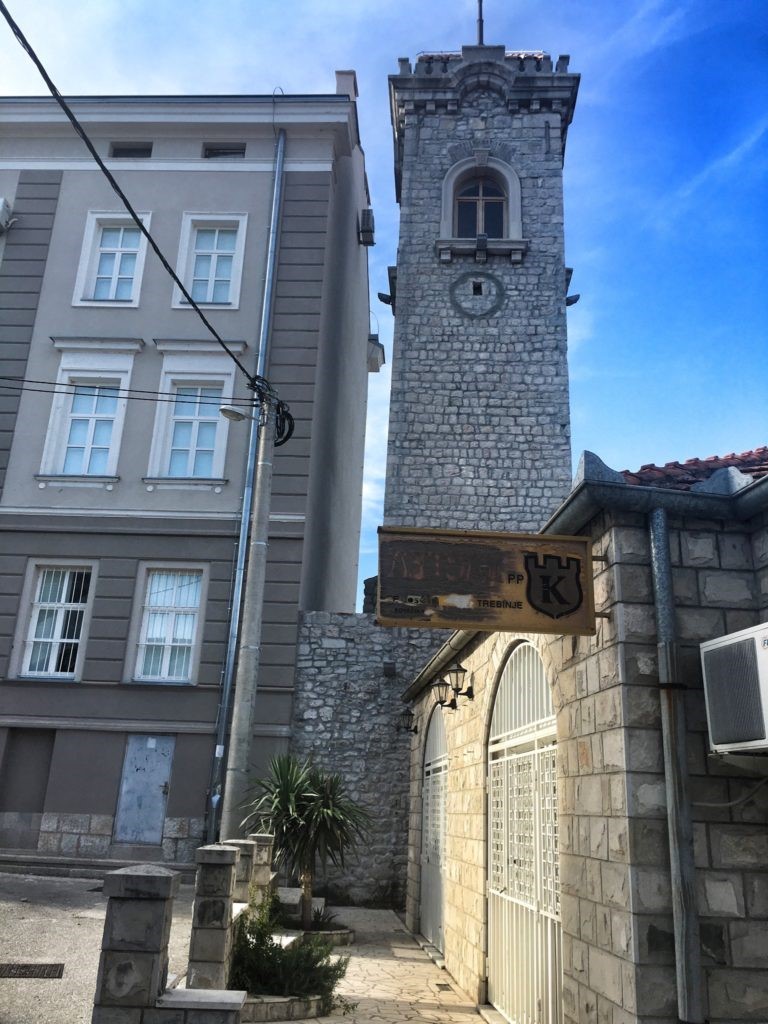 Just outside the west gate of Kastel is the Korzo, Trebinje’s main promenade/chill out area shaded by massive plane trees which have become one of the symbols of the city. There are about 150 around Trebinje and bring much needed relief from the 260+ sunny days the town enjoys each year. The main piazza just off the Korzo hosts the Trebinjska local market every day from 7am-3pm though on Saturdays is when you will find it the most hopping. 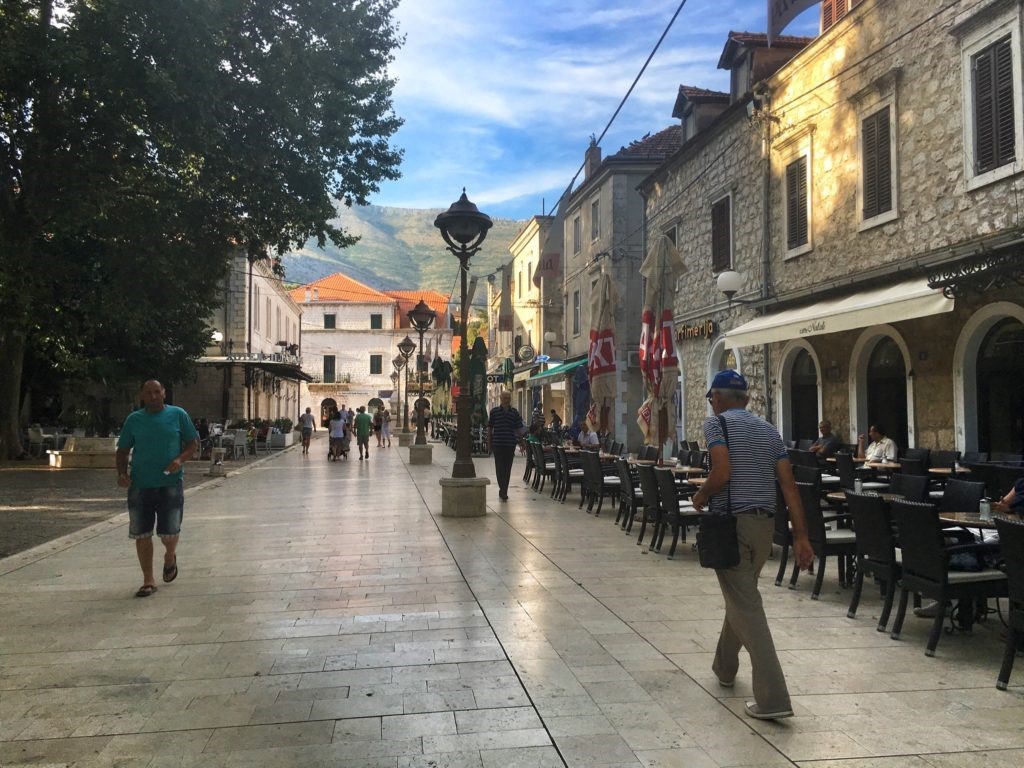 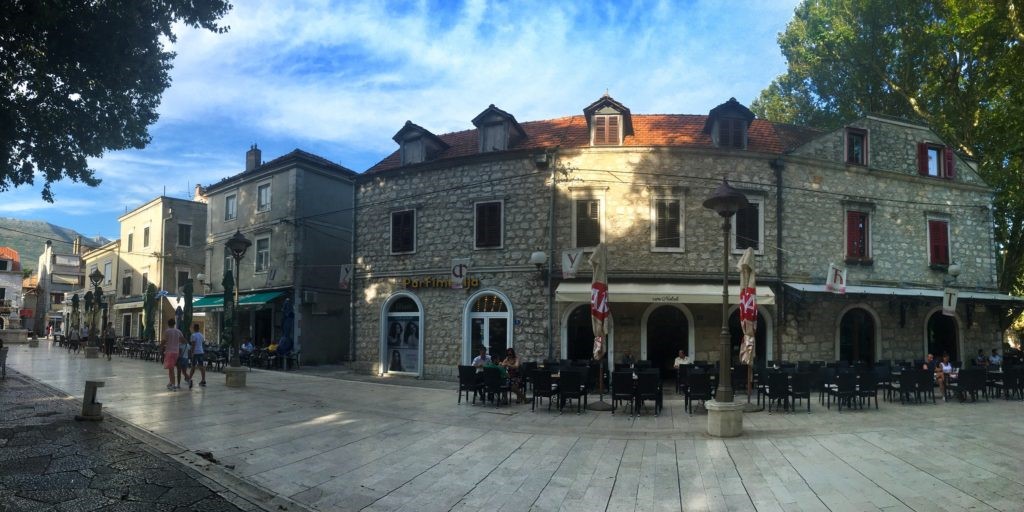 There is a lot more shade to be found down the road in Gradski Park and as well the Orthodox Church of the Holy Transfiguration of the Lord – apparently the prettiest church in the Republika Srpska. If hiding in the shade of the park isn’t cutting it, you can also head south towards the river to an awesome swimming pool made from the water of the Trebišnjica that is free to use and won’t turn your hair green. 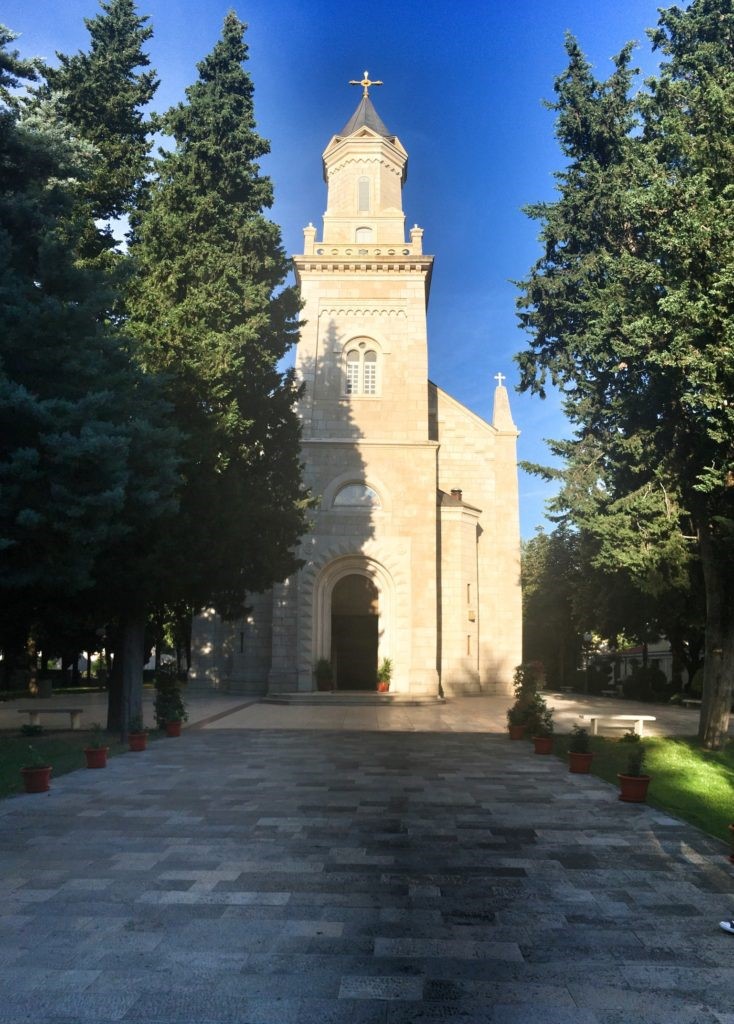 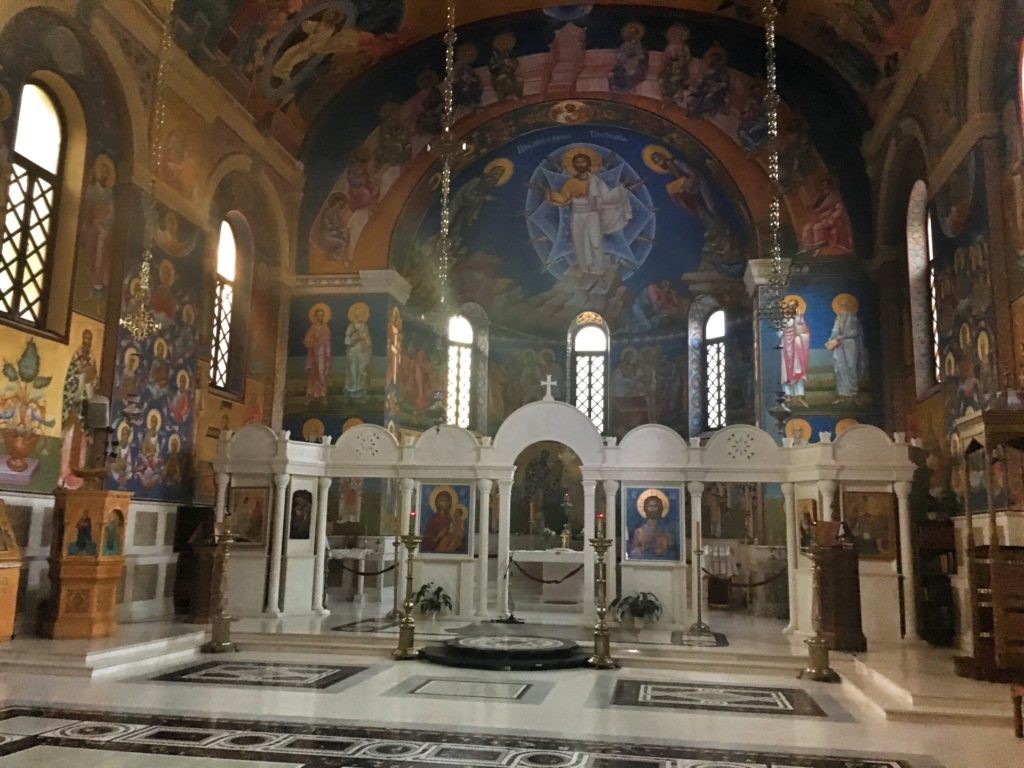 Another symbol of Trebinje about a 10 minute stroll north along the Trebišnjica is the Ottoman-era Perović (Arslanagić) Bridge built in 1574 by Mehmed Pasha Sokolovic who is also responsible for the famous bridge on the Drina in Višegrad. The original location of this bridge was several kilometers away, but in the 1970s they painstakingly moved every single piece of it to its current location as it became submerged by water as a result of some hydropower projects. 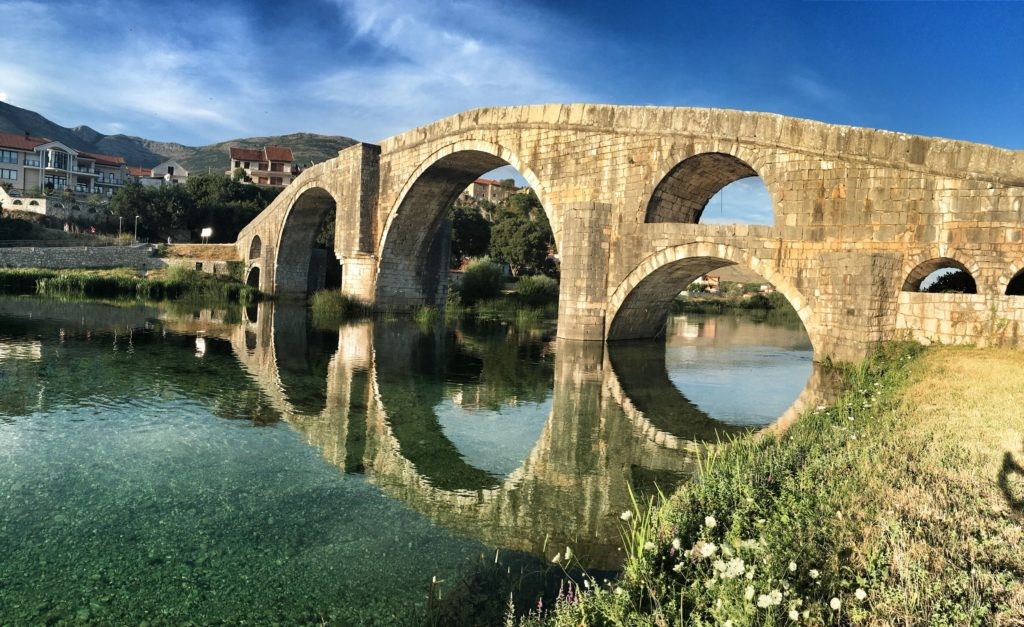 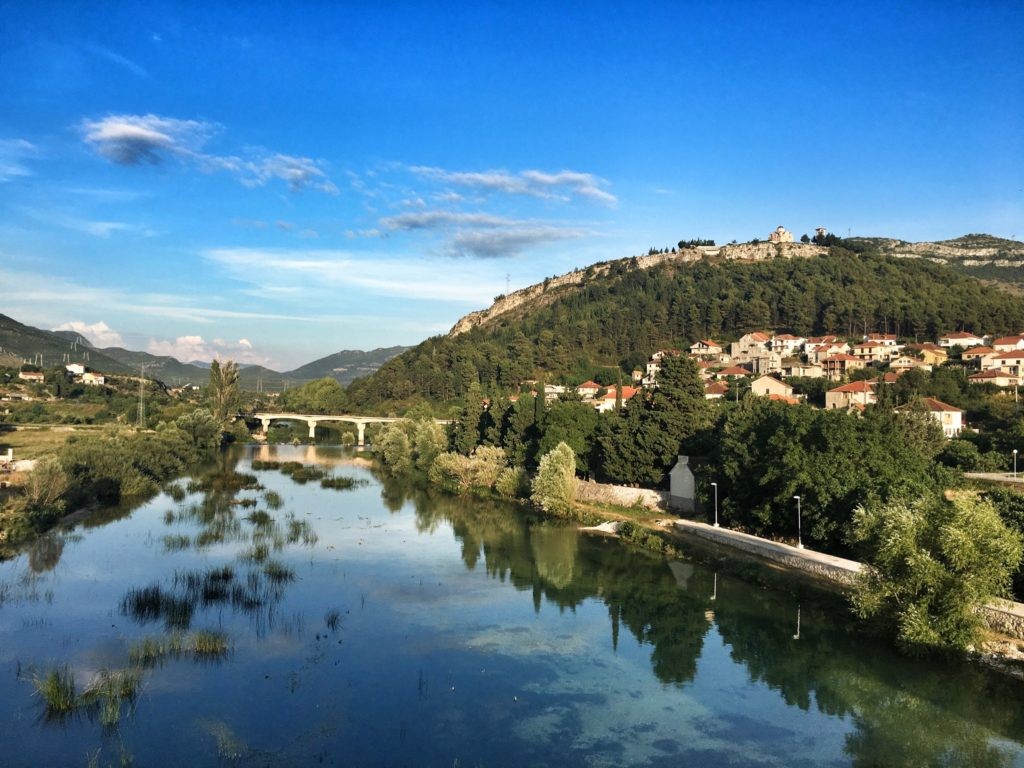 Looking east from the bridge you can’t miss the Herzegovina Gracanica Monastery that sits atop Crkvina Hill. It’s quite a hike up and there are no public transportation options to get you there, but definitely worth spending a few euros on a cab if you are without your own car as it is for sure one of the best attractions in Trebinje. 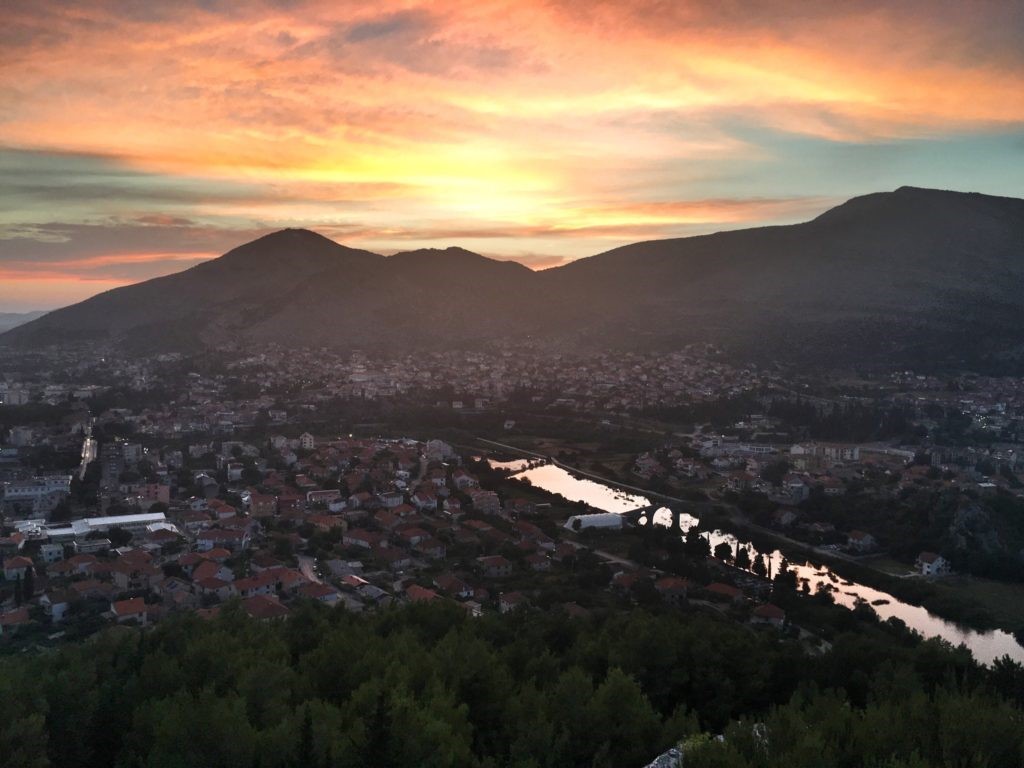 You won’t find a nicer view of the city, particularly around sunset, and the icing on the cake is that within the complex there is a really sexy open-air cafe perfect for a sundowner or dinner. The monastery was built in honor of the city’s most famous poet, Jovan Ducic, whose remains were moved from the USA and buried there in 2000. If you’ve spent time in Kosovo before it may look familiar to you as it was modeled after the Gracanica Monastery just a few kilometers outside of Prishtina. 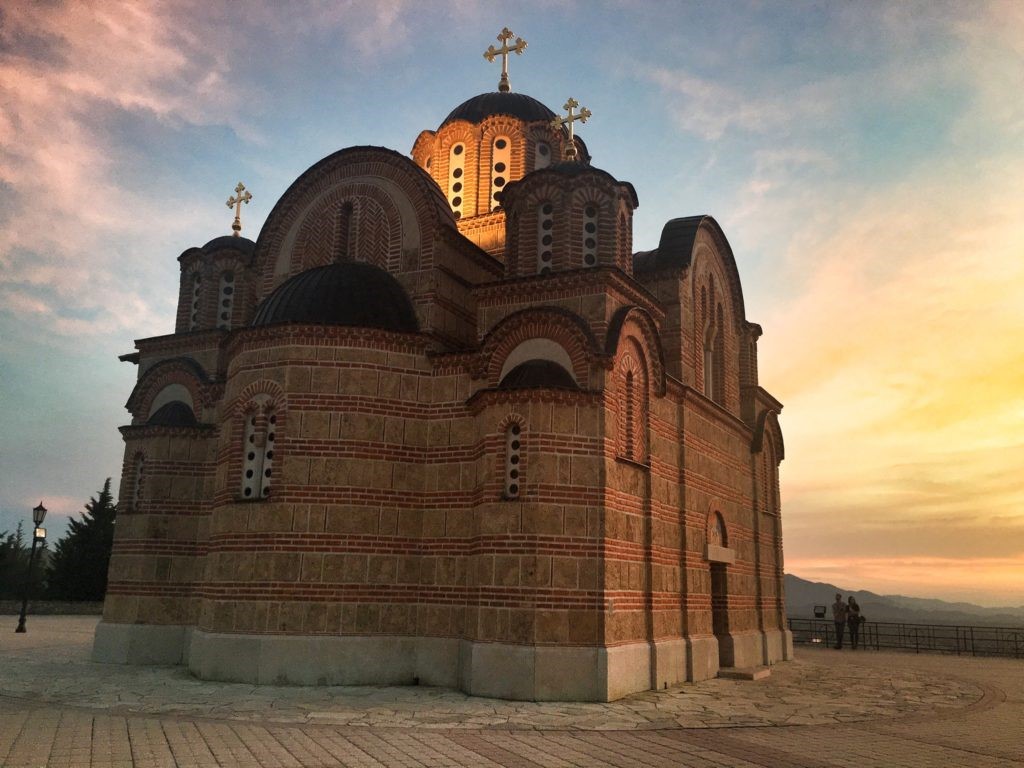 Whether on your way up or on your way down from Crkvina Hill, a cool place to stop if you like interesting libations and interesting people is the Trebinje outpost of Ekološko Gazdinstvo Vlačic. It’s one of the only places in the world I’ve ever seen fig rakija and the owner, Bozo Vlačic, is quite the entrepreneurial character who will no doubt fig you out with his growing assortment of products made from all parts of a fig tree (like jam, tea, candies, powder, etc). To find the exact location, just ask anyone in town – he is quite well-known and for good reason. 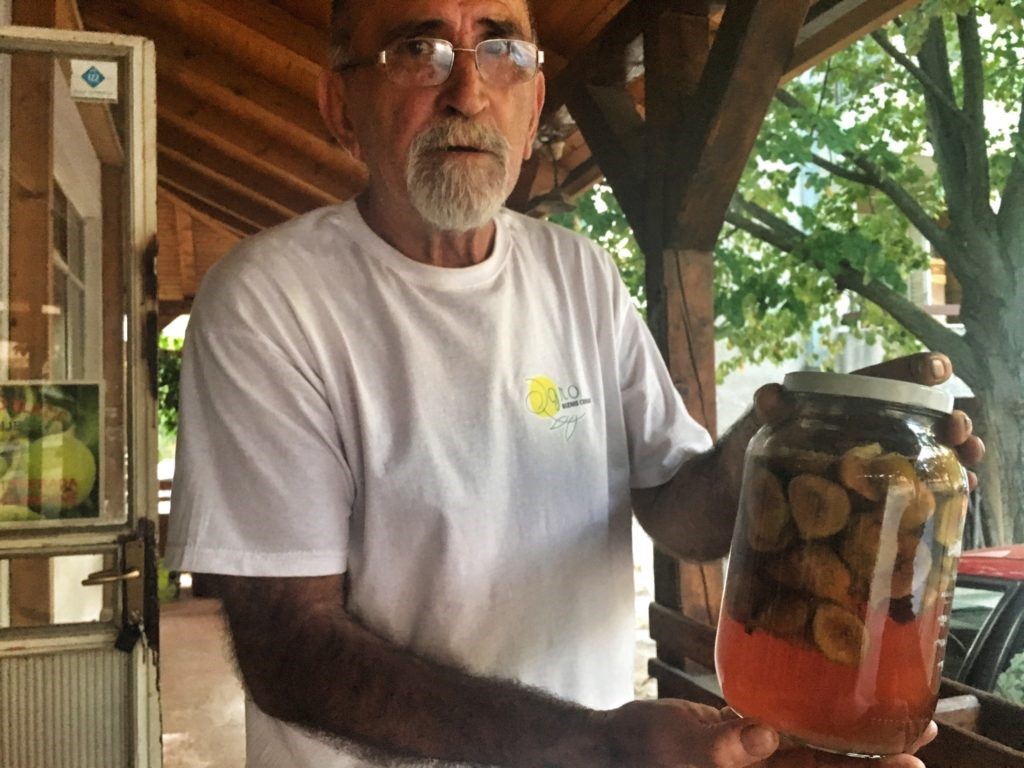 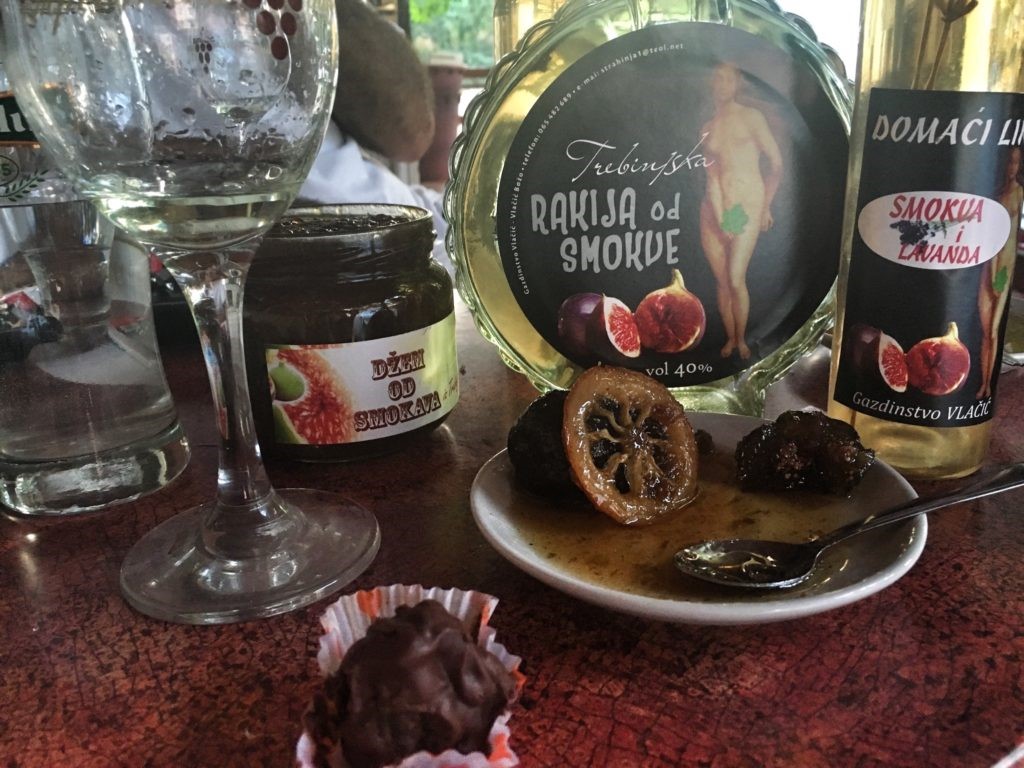 A unique monastery (and wine tasting) experience at Tvrdoš

Herzegovina is like heaven for wine lovers with its supreme growing conditions and unique varieties that aren’t found anywhere else outside of the Balkans. Though I haven’t visited any other wineries in the country, I think it is safe to assume the Tvrdoš Winery is by far one of the most unique as its wine cellars sit beneath one of the loveliest monasteries in the region, Tvrdoš Monastery, just four kilometers west of Trebinje. 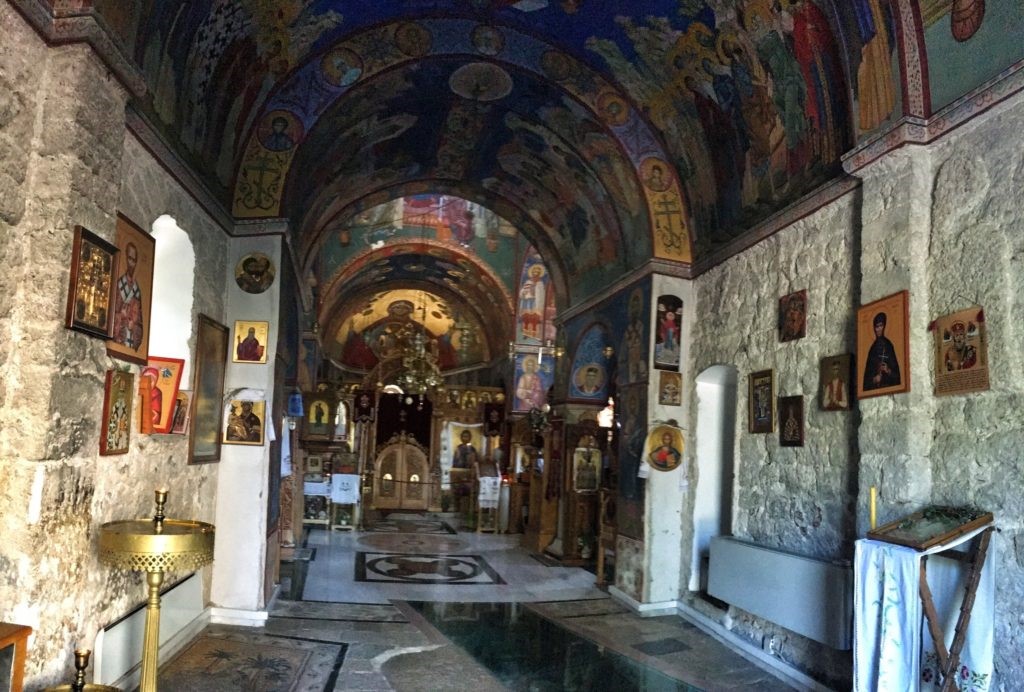 First built in the 15th century on top of the foundations of a Roman church from the 4th century of which you can still see when you walk in, the church here is a real stunner with amazing fresco creations done by painters from Dubrovnik and contains some pretty interesting relics like the lady fingers of St. Jelena Anzujska. There is also a small wooden cross allegedly made out of the one used in Jesus’ crucification, but no word on how it made it to Herzegovina from Jerusalem. 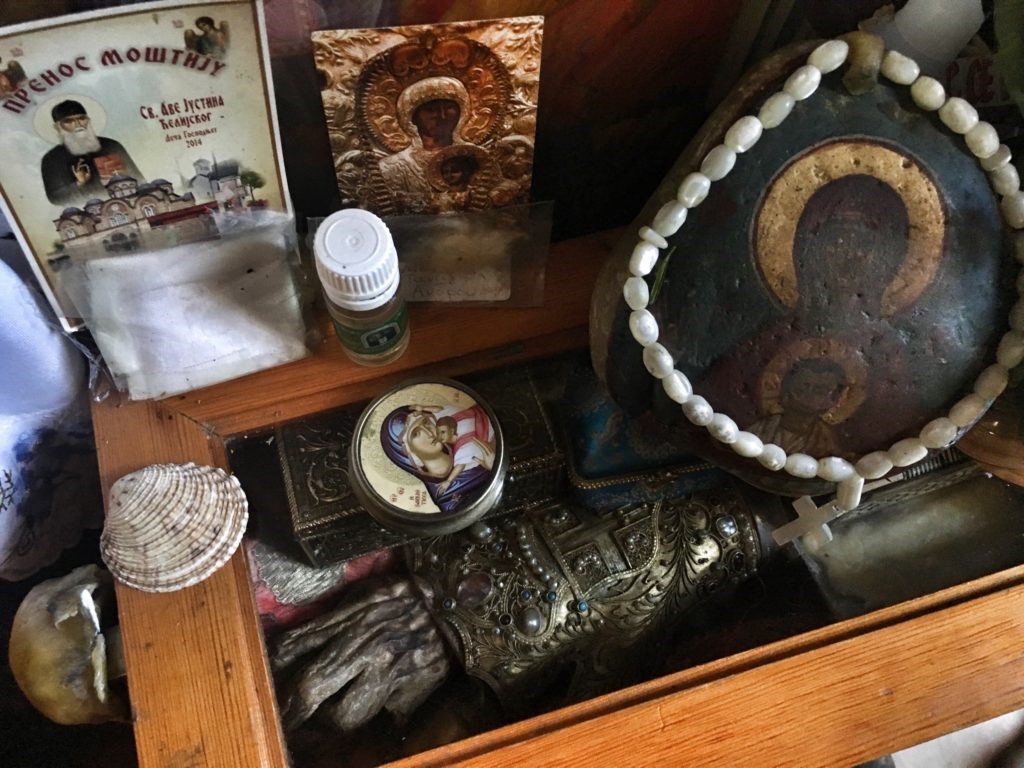 The oldest wine cellar you can visit at the monastery is from the 16th century and they’ve done an amazing job putting together a seriously atmospheric area for tasting the wine. Two of the most notable varieties are Vranac (a typical Balkan red) and Žilavka (similar to a Riesling and known to be tough for its ability to grow on karst and rocky soil). Of course you can also get your rakija on with my personal favorite being the travarica made from a mixture of herbs like sage and rosemary. 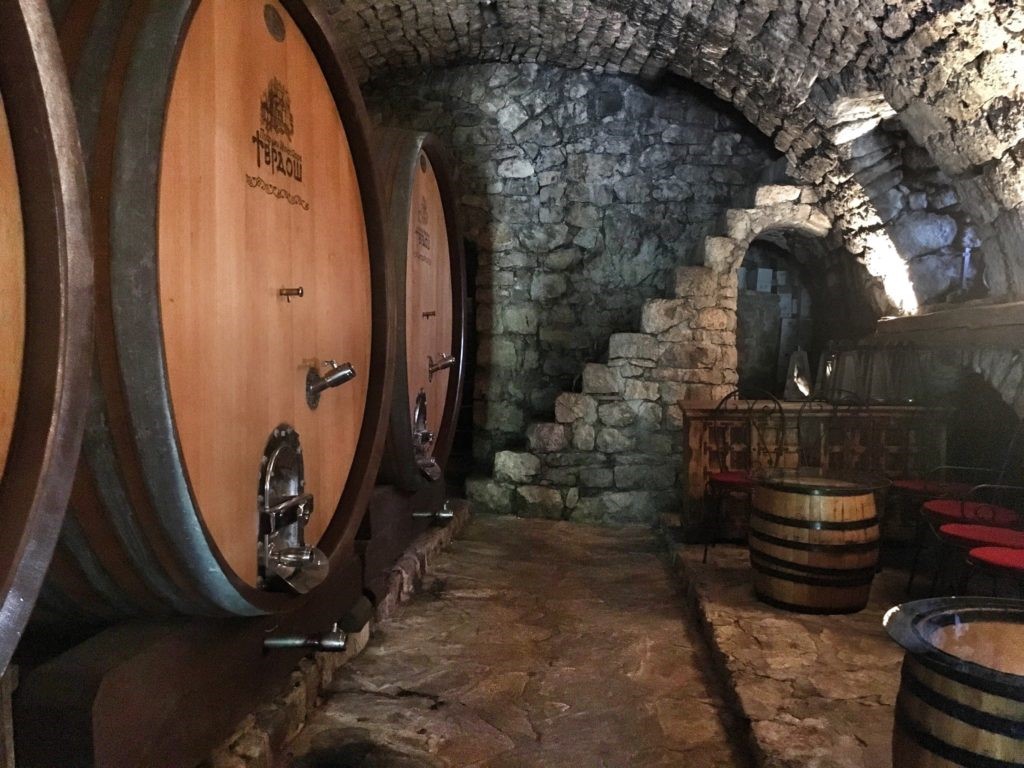 Cycling in Tito’s tracks around Lastva and Jazina

Heading east from Trebinje towards the Montenegrin border is the small village of Lastva which is an excellent spot to do some cycling around for a lot of different reasons. Along the river there are more abandoned tracks from the old steam train that used to run through which is a very scenic trail and leads you towards lovely Jazina where you can take a break at some beautiful aquamarine swimming spots. 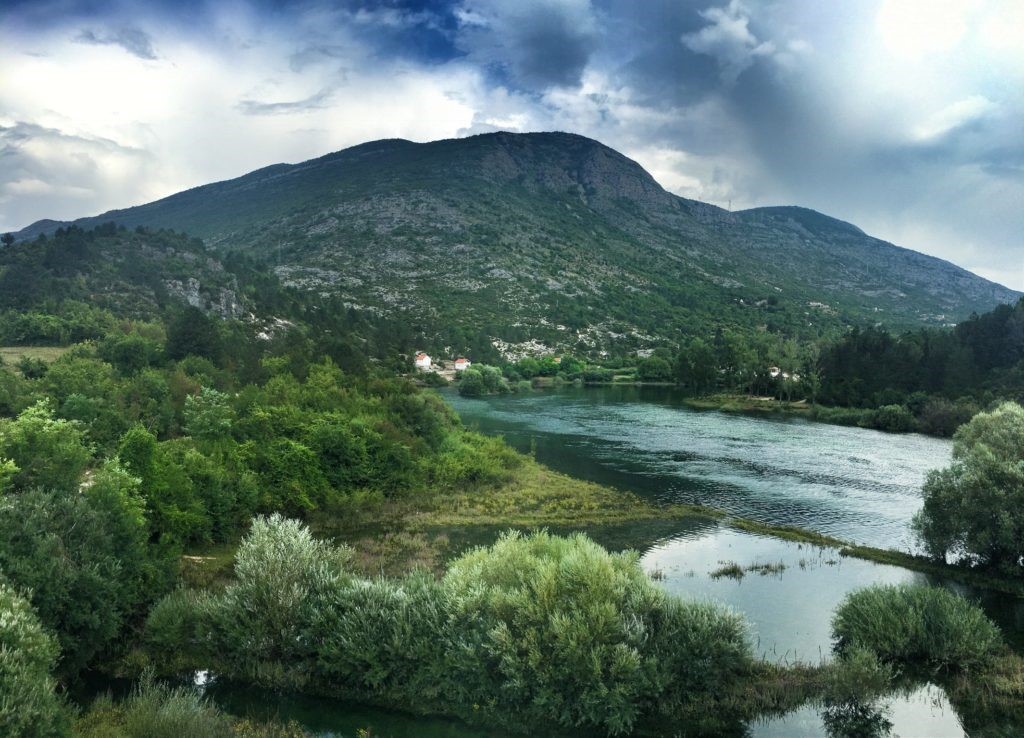 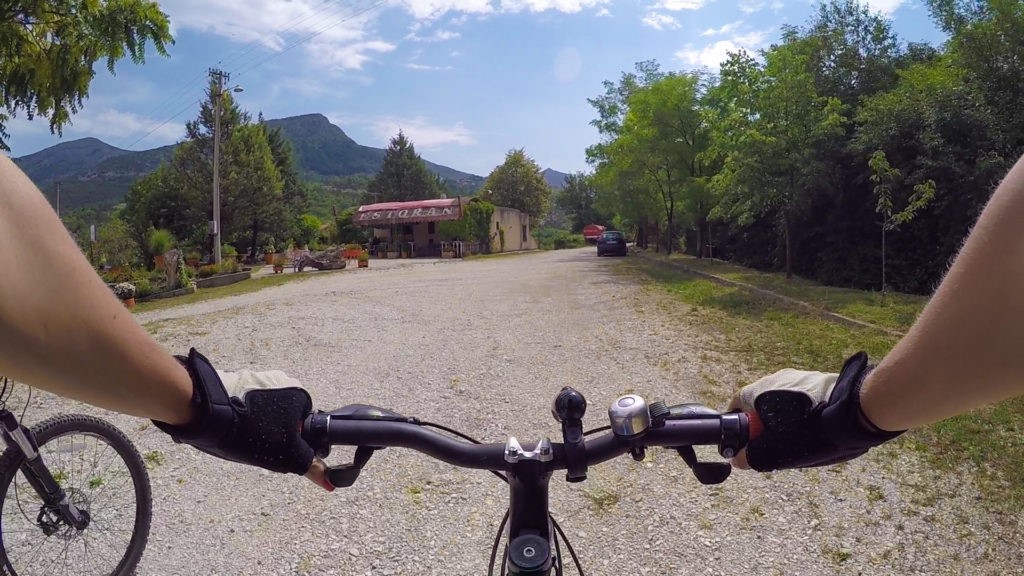 Nearby Jazina are the Imperial Vineyards designated by the royals of the Austro-Hungarian Empire as the best spot for growing Žilavka and from the top you have a wonderful view of where the Trebišnjica meets the Sušica river. Not a bad place to crack a bottle open and give a cheers to Mother Nature for creating such a lovely corner of the world.
Heading back towards Lastva, there is one more spot you can’t miss (assuming the construction guys let you have a gander) that in due time is sure to attract many more visitors once the renovations on it have been completed and that is Tito’s villa. Just one of the 100+ it seems he had scattered around the former Yugoslavia, there are plans for it to be turned into a hotel, restaurant and winery. My favorite feature is the tiny balcony they built just for his wife Jovanka and, needless to say, another special spot to enjoy some more Žilavka. 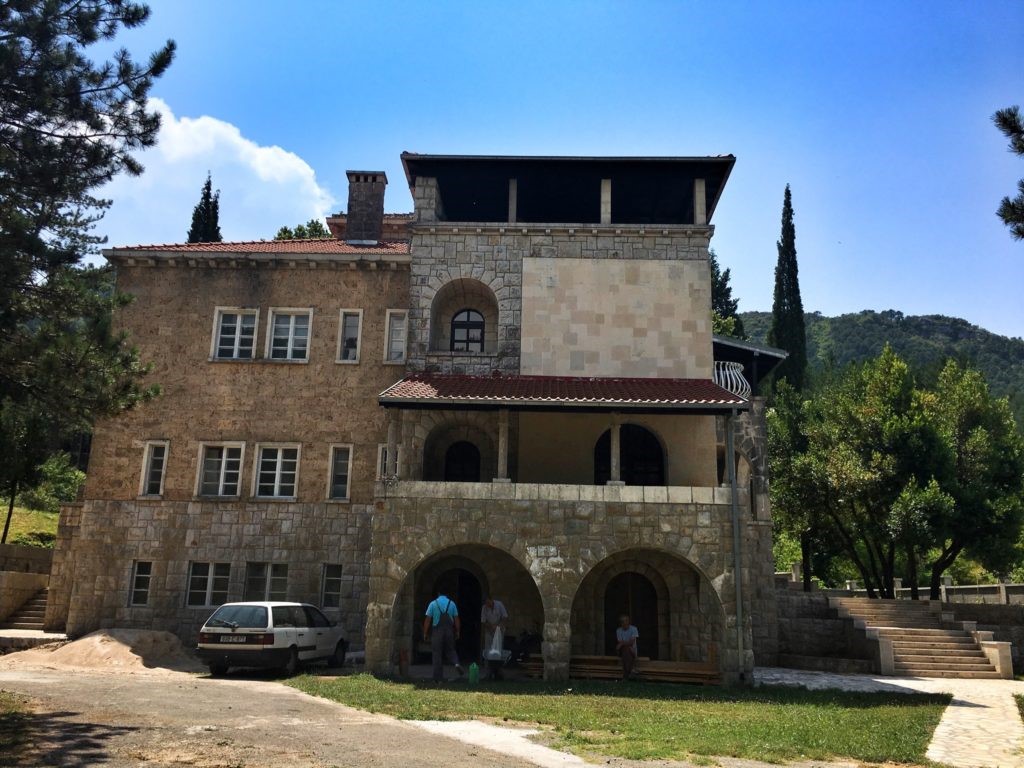 On the herb and honey trail in Ljubinje

Last but not least on my jaunt through eastern Herzegovina is sweet little Ljubinje. Since the Middle Ages this town about halfway between Mostar and Trebinje has been known for its herbs and honey with people from other parts of the region even going so far as keeping their bees and livestock in Ljubinje. For me it holds a special place in my heart as it also happens to be where one of my favorite restaurants in the Balkans is located. 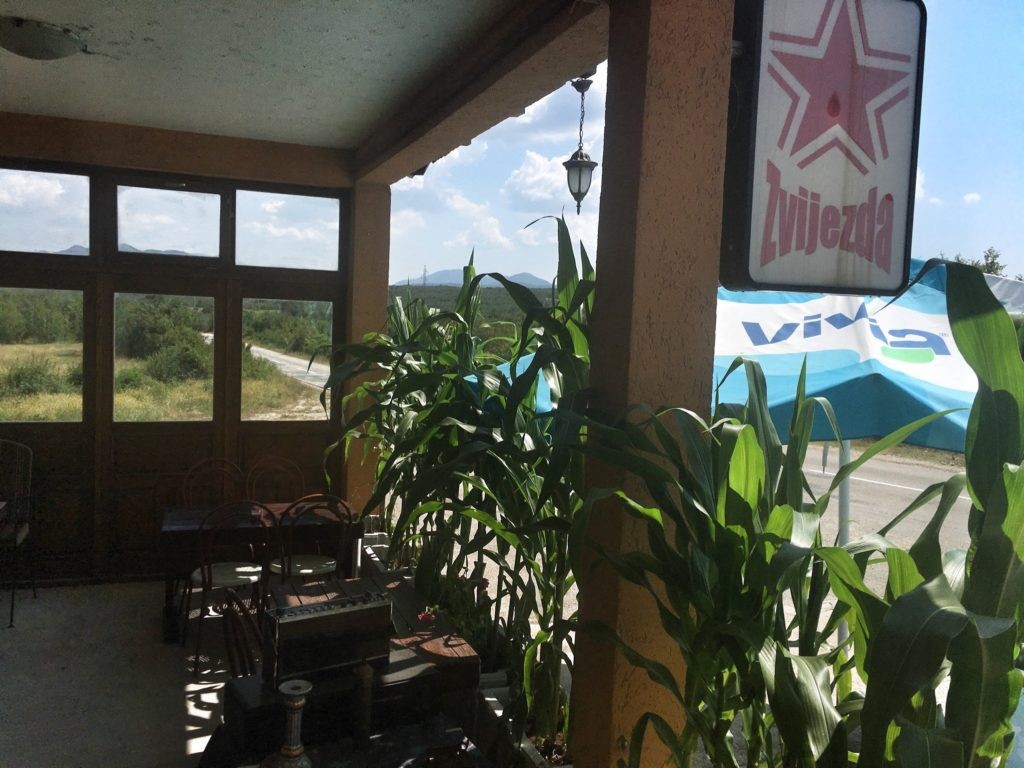 Zvijezda is a super non-descript roadside dining establishment that kind of has a “middle of nowhere” feel and I really don’t think it can get more authentic kafana than this. I stopped there a couple of times with the groups from my Balkan tours that I did a while back and it was always good fun that usually involved an incredible amount of rakija, tasty food, and local hospitality. This time I had the honor of enjoying a meal with the owner, Slavica, who came all the way from Mostar to meet me and my mantourage (shout out to Marko from www.trebinjetravelguide.com and Micky from Ljubinje Municipality for guiding me through these parts) which was just lovely and I can’t wait to return. 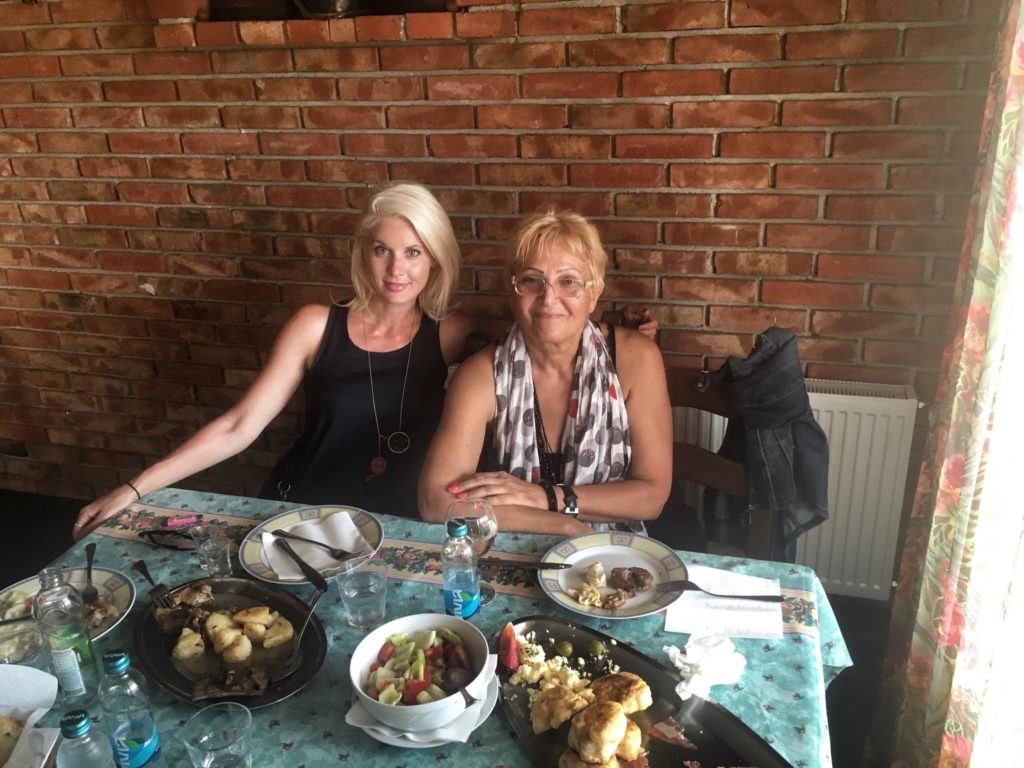 Ljubinje actually has quite a bit of history for such a small town which I would have never expected, but much of it is still being organized, translated, and excavated so don’t expect to be blown away by the amount of things to do. Its most famous sight is probably the Orthodox Nativity of the Virgin Church partially built out of stećci and holds a couple of really old books (like almost 450 years old) as well as some ancient artifacts that have been dug up in the vicinity. Micky had heard that I liked wine so we also turned it into a nice place for tasting a local variety that was produced right across the street. 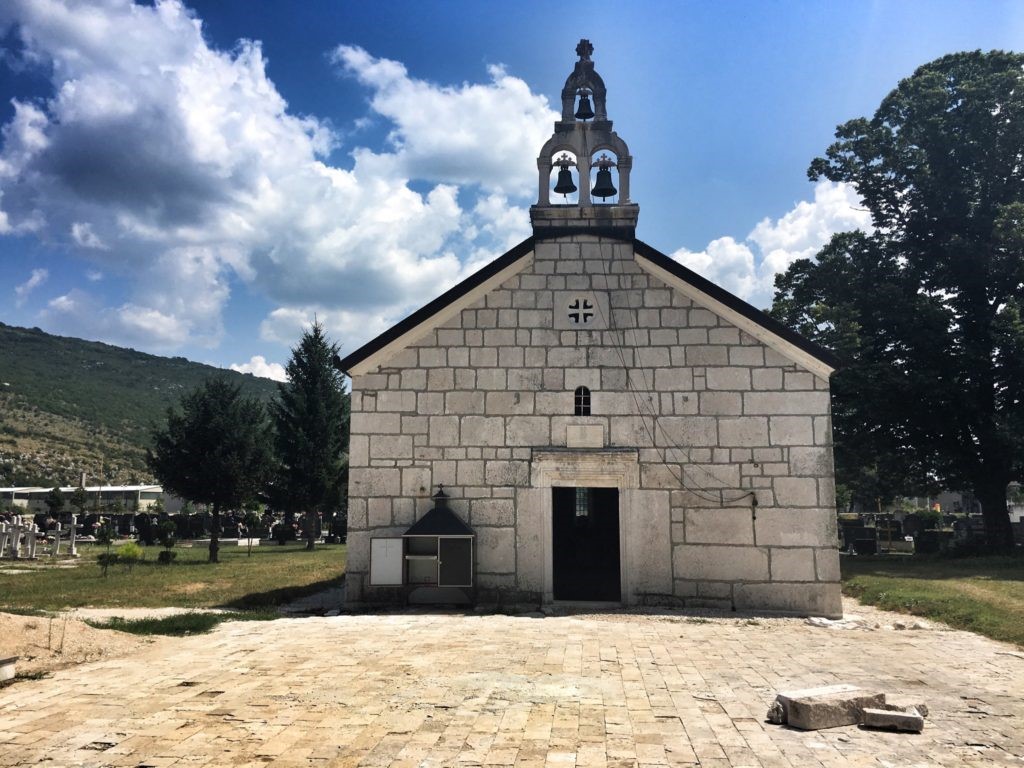 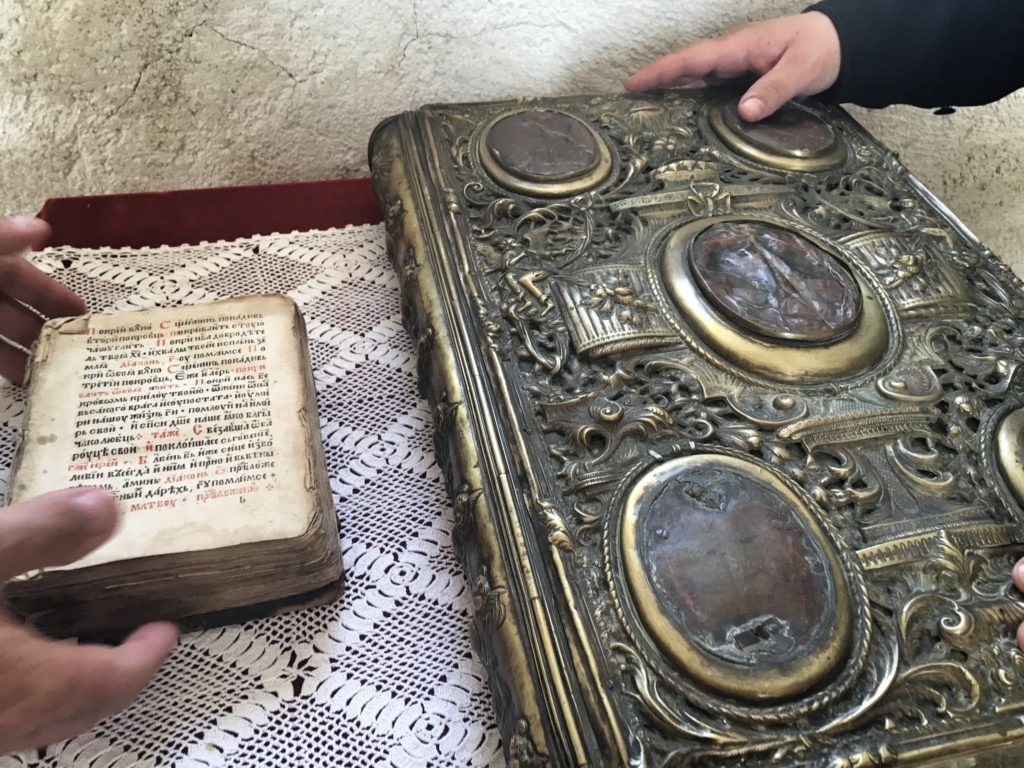 Hidden up in the hills is another church, The Church of Saint Prince Lazar, definitely worth checking out though in all honesty to find it without a guide or help from the municipality might be slightly tricky. It would be a wonderful spot to hike to and even stay some days as the air up there is probably some of the healthiest in the world. Stepping out of the car, my nose and lungs were immediately greeted by a variety of herbal scents and my liver another bottle of wine – this time some local Žilavka – compliments of good ol’ Micky who sure did his research before meeting me. 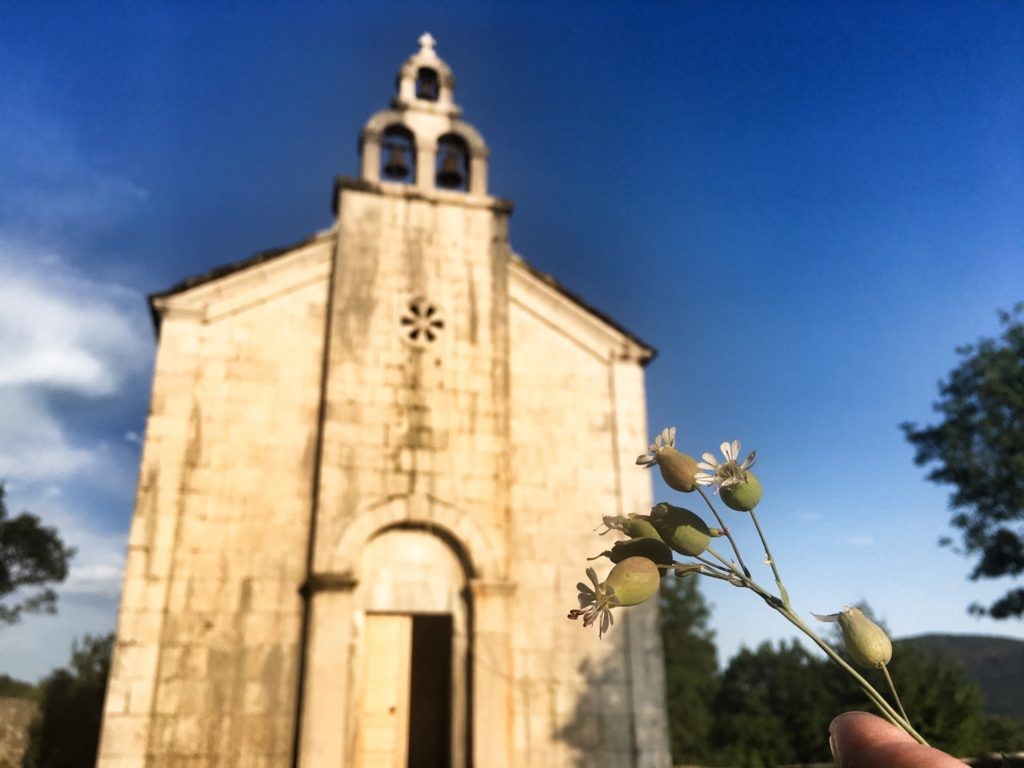 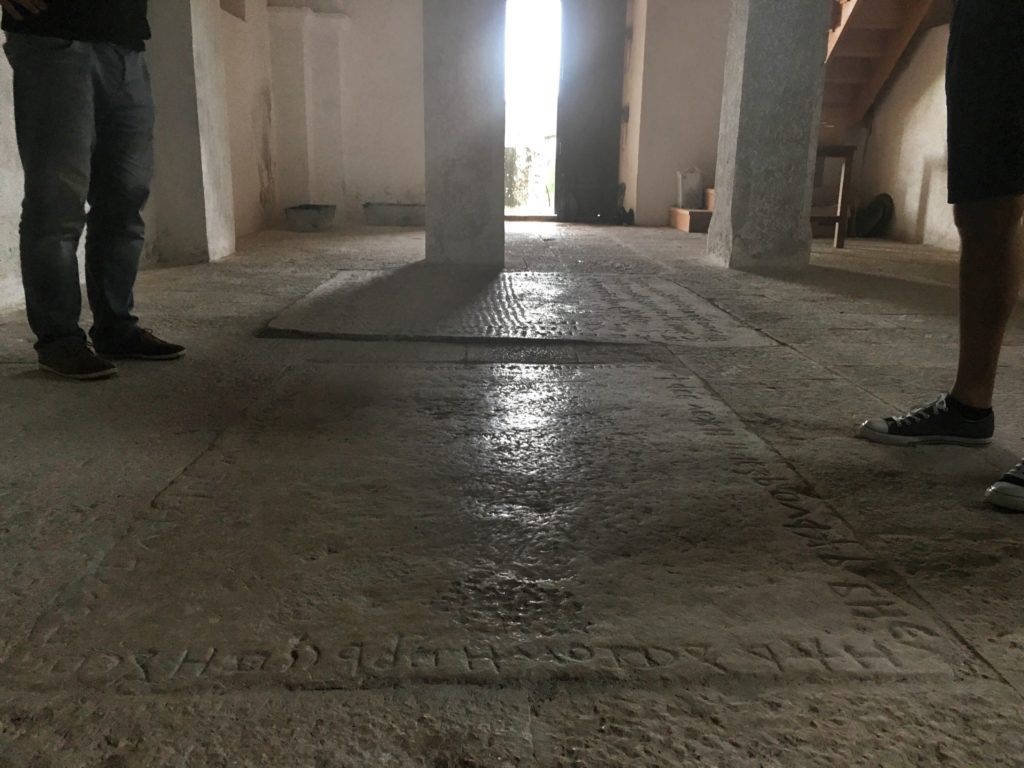 Buried here are the father and son of the Vlahovici family who were essentially like the Illiuminati of Herzegovina back in the 14th and 15th century days. It’s a complex family tree that involved marriages to some other VIPs in the region but the most important piece of information I got out of the whole story is the fact that when they opened one of the graves in 1864, they found a perfectly aged bottle of wine which leads me to believe they also liked to party. Something in the wine, herbs, and water…makes sense why so many Ljubinjites have gone on to be famous in Hollywood and beyond. 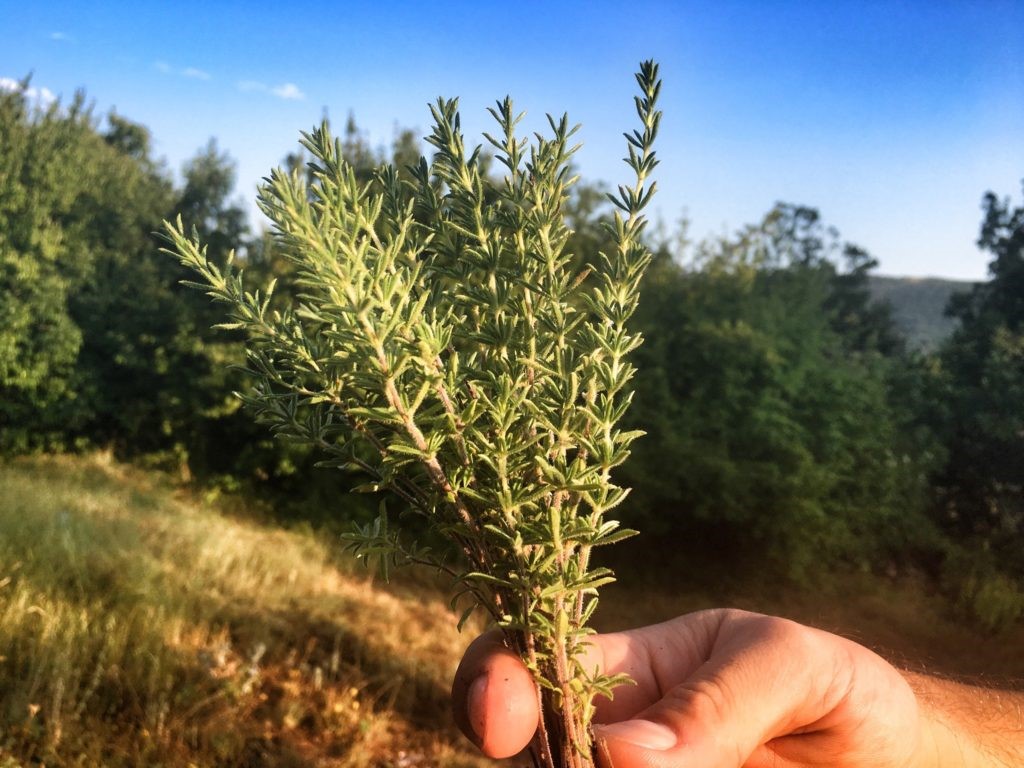 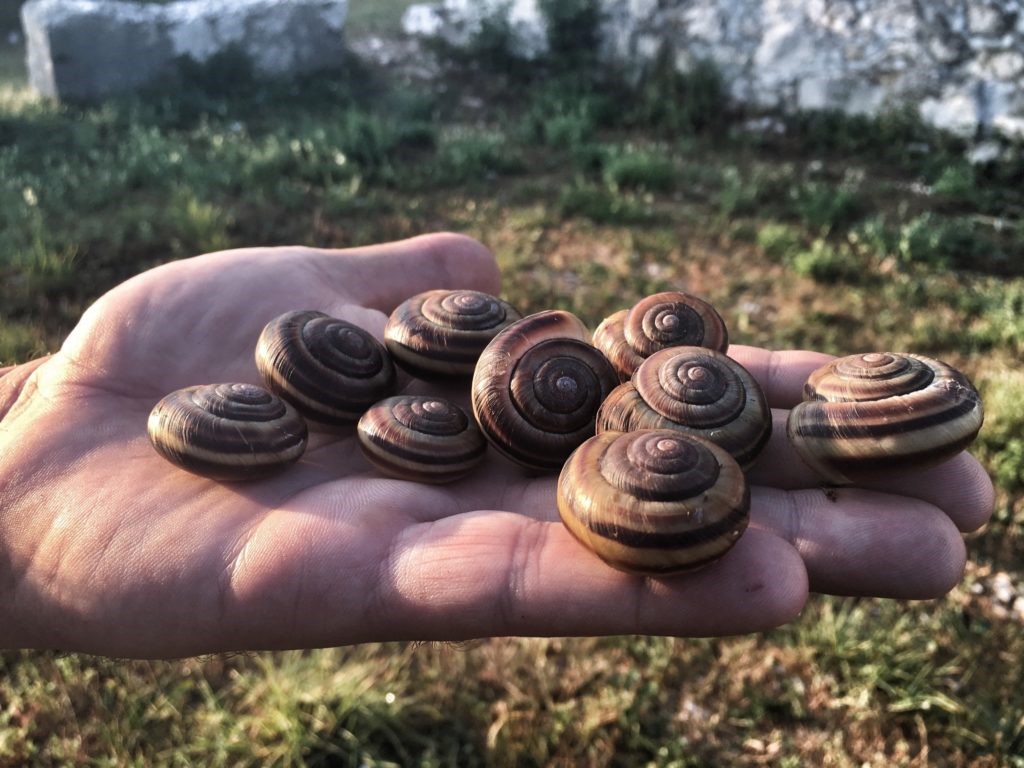 I think I fell a little bit in love with Trebinje and all there is to do in eastern Herzegovina. Herbegovina. Herzegowinea. Prior to my extended stay there, I had only ever passed by quickly enroute to Kotor or Dubrovnik like I think the majority does, but for those looking to spend a little less and live a little more then this is honestly where it’s at.
Special thanks to all the incredible characters who helped me have the best possible stay that I could and showed me that in many ways the south does it better. Any other attractions I missed in this corner of Herzegovina?

The project “Sustainable tourist development – From Herzegovina trails to Dubrovnik Elaphiti islands“  is financed by the European Union under the IPA CBC Programme Croatia – Bosnia and Herzegovina 2007 – 2013.