The Culture of Coffee

More than a drink, real kafa is a ritual

Few misconceptions are as widely spread as the one about Turkish coffee. If you order this thick, dark beverage with its bewitching aroma in Turkey, you’re bound to be horribly disappointed. You won’t be served a džezva (a hand-engraved copper or tin coffee pot), a šećerluk (a proper sugar bowl), or a fildžan, (a small, handle-less traditional coffee cup). Instead, they serve coffee in a mug or worse yet, in a teacup. Offering coffee in a cup with a handle to a die-hard Bosnian coffee drinker is the equivalent of serving tea in a soup bowl to a proper English lady. For the coffee of your dreams, you’ll have to come to Bosnia and Herzegovina. This is the real thing. So, from this point on, this bewitching, heavenly drink will be referred to as Bosnian coffee.

Truth be told, even in a country where coffee is a national pastime, there are fewer and fewer places to have coffee prepared in the traditional way. Bosnian coffee is often replaced with flavored instant coffee, espresso, or filtered coffee – all of which, by local standards, diametrically oppose the theory of good coffee because they don’t have the granules. The rule here: the thicker the better.

Offering coffee in a cup with a handle to a die-hard Bosnian coffee drinker is the equivalent of serving tea in a soup bowl to a proper English lady.

Good Bosnian coffee has its own lore and method for preparation, of course. To yield the proper results, whole coffee beans should be bought raw. The beans should be freshly roasted in a wood-burning stove. It’s not a general practice to store ground coffee, either. One grinds them just before brewing and only in the amount needed for that particular serving. In some places old traditions are still respected. Coffee grounds are roasted in a shish, a simple metal cylinder at the end of a long skewer. Unfortunately, this practice is almost extinct. What a shame … the aroma is singular. 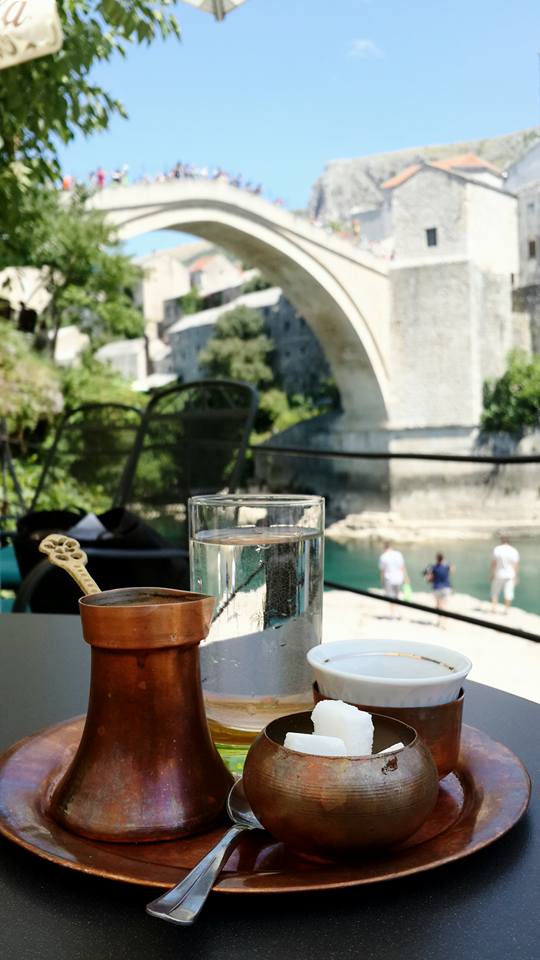 Coffee roasted in this way should not be put in an electric grinder. There is no scientific proof to back the theory, but it is common knowledge that these gadgets over-grind the coffee. Every self-respectable household or café priding itself in offering proper bosanska kafa, has to have a handheld manual version. Properly grinding the beans is an art form. Leaning the tool on your lap if seated – or on your hip if standing – you hold the grinder firmly with one hand. Then turn the handle with the other. This may seem rather menial, but churning until the beans are finely ground will leave even the fittest wondering what these beans are made of.

Coffee is brewed in a džezva, which is first warmed up a bit. The not-just-yet-boiled pot of water on the other ring is removed just before the boiling point. A fildžan of this hot water is set aside and the rest is poured into the ground-coffee-bean-filled džezva. It is stirred and placed back onto the stovetop. The coffee should boil until a rich layer of foam reaches the very top of the džezva. Removing it from the heat, pour the water from the fildžan over it and set it aside for a moment until the grinds settle on the bottom.
It is then served in a fildžan. Traditional coffee drinking entails sucking one’s coffee through a sugar cube. Not a whole one, but a chunk of a cube that is first dipped in the coffee to soften it up before sinking your teeth into the now-brown and melting cube. Nowadays, this ritual is mostly practiced at home. There are, though, a few kafanas around town clinging to this noble art. Old habits die hard in Bosnia and Herzegovina.

An invitation for a coffee rarely means the necessity of a shot of caffeine to stay awake or make it through the workday. Coffee here is an invitation for conversation. This implies time. And making time for friends and family is something that is valued here above most other things.